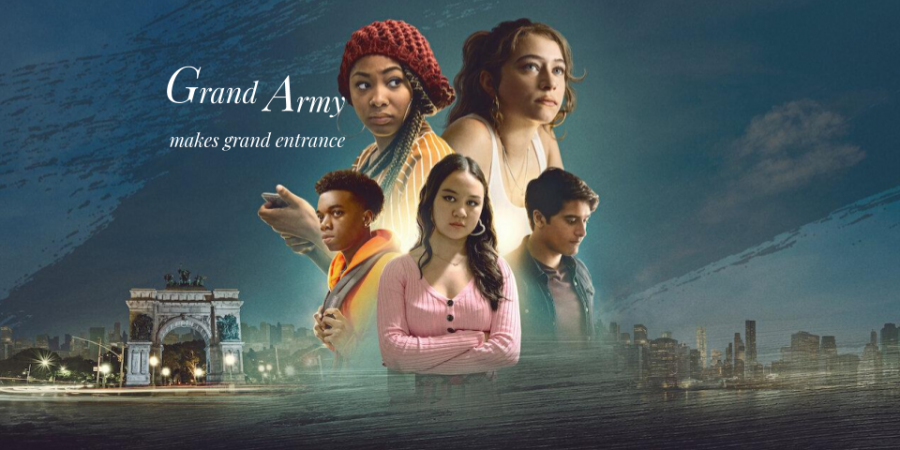 Grand Army is an American tv series created by Katie Cappiello, adopted from her 2013 play Slut. The series follows the story of five high school students expected to overcome racism, sexism, racial and religious stereotypes. The show starts with Joey Del Marco dealing with how a bomb went off outside the school, causing it to go into lockdown.  All the students are crammed in the staircase. This is the part when swim-jock Sid a.k.a. Punjab leaves the staircase to go find his younger sister and runs into Leila Kwan Zimmer in the hallway crying because her classmates were bullying her for being an adopted Chinese daughter to two Jewish-American parents.

The first episode focuses on the physical danger the kids may be in, but is more concerned with how they behave in such a scary situation. Some are completely unbothered and couldn’t care less about what’s going on, like Jayson and his friend who start digging through the purse of basketball player Dominique, as a joke. Others treat the experience as an opportunity for self-reflection, like freshman Leila telling star swimmer Sid about her struggles to fit in. “No one even knows me here,” she said, “And I don’t like myself here.” Sid, who has just met her and otherwise seems to have the whole school wired, listens to her story, then says to her, “I feel similarly.”

The show takes you through the journey of the high school students, and the hardships they experience. Grand Army tells Dom’s story very well and with great sensitivity. Dom’s family’s financial situation was laid out carefully; it shows the ups and downs and what she has to do to support her family, but to make clear just how much harder she has to work to enjoy the same high school experience that comes so much easier to privileged, wealthier classmates like Joey or Jay.

Although the show does have some flaws the writers cover some really important topics like rape, drug use, sexual identity, and racism. These kids carry burdens, responsibilities, expectations and shame. As the episodes go on, they sink further and further underneath all their problems. Even when they appear to act strong and confident, they’re all going through their own problems.

Grand Army focuses on things that are not talked about that much in society, such as the type of sexual assault that Joey goes through. Joey was not assaulted by some random bad guy nor a manipulative older man. Instead, Joey’s best friend takes advantage of a playful situation and turns it into a moment that will scare her for the rest of her life. The scene is not portrayed as a quick moment. It isn’t full of quick clips or short shots. It makes the audience grasp the situation. Seeing that scene helps viewers understand where Joey is coming from and that it takes a great deal of courage for her to go to the police station and report her best friend for raping her.

In conclusion the show Grand Army touches on many issues going on in the world today especially if you’re a woman, a person of color, or even having financial issues. It also talks about how all of this can affect and have a huge impact on a high school student. So I highly recommend this show (even though it’s rated R).