Newsies forever: second to none 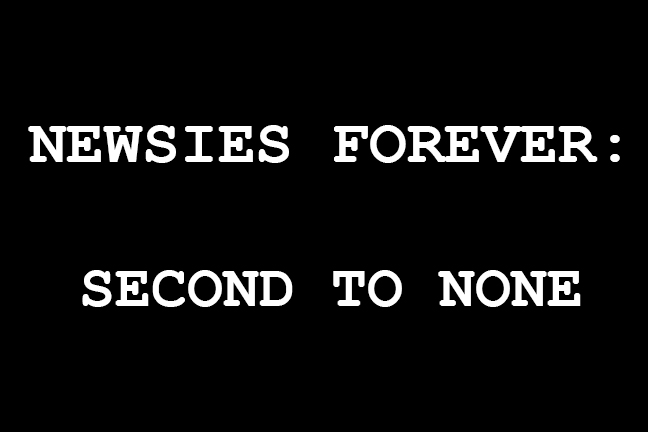 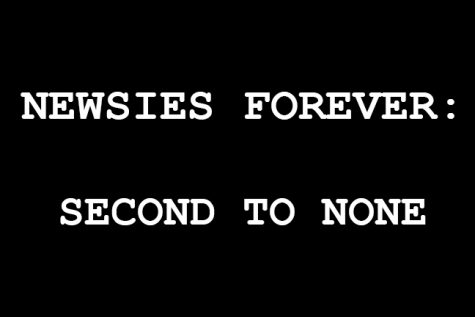 The Broadway musical “Newsies” debuted last night to a full house at the Mayo High School auditorium. From the first notes of Dominic Sinicrope’s lone horn in the darkness to the growing instrumentation of the orchestra’s excellent take on the early twentieth century sound, to the crescendo of singing and dancing that fills each scene, the play brings an energy born of passion and dedication. To see this performance is to witness the triumph of months of hard work, team work, …truly, good work.

According to the play’s program, this production is “set in turn-of-the-century New York City.” It follows the hopes, dreams, trials, and tribulations of “Jack Kelly, a charismatic newsboy and leader of a band of ‘newsies.’ When titans of publishing raise distribution prices at the newsboys’ expense, Jack rallies newsies from across the city to strike for what’s right!” One theme emphasizes the power of every single contribution to a cause or effort, no matter how big or small, and it is obvious that the cast and crew of Mayo Stage Door Productions embody this ethic completely.

Hayden Clark’s performance as Jack is impassioned and bold. He does an excellent job of conveying the character’s cocky fearlessness at the same time that he struggles with obvious fears and misgivings. Often, Clark has the audience in the palm of his hand, particularly when singing over the rooftops of New York about his hopes or heartaches.

So too does Jessica Rehmann as Katherine, the young journalist. Her rendition of “Watch What Happens” stuns the audience with the rapid pace of a frantic, fleet-fingered typist. Her brilliant performance of this song conveys as many emotions as lyrics in the song, as she struggles with writer’s block and other inner secrets, understands the peril facing the newsies, moves towards a vision of how to get the story written, then sees the impact the newsies can have on society.

A great number of performers also give incredible vocal solos including Mia Suzuki as Medda Larkin, who brought the house down with her rendition of “That’s Rich” and Gracie Grimsrud, who’s character known as Crutchie creates a very emotional moment, singing all the pain the character feels into the lines of a letter meant for Jack. For both of these singers, their power, vibrato and sincerity on stage win the crowd over easily.

However, no play would be complete without a believable villain, and this production does not disappoint in that department. Charles Smoot’s performance as Joseph Pulitzer is not only credible, but it wiped the smiles from audience member’s faces on Thursday night; his lyrics cut like a knife through any hope the newsies and the audience have. Then too, Ryan Robinson’s Snyder is a believable and intimidating nemesis, while Levi Williams and Elijah Taubel are terrific trouble-makers. All of these characters do much to stoke the ire of the audience and the newsies.

Other bright spots include the character development of Les (Connor Morrey), who embraces the many shades of color between the black and white of the newspaper business. His brother Davey (Connor Brown) embodies the theme of unity as his character rises from a noobie newsie to a very crucial member of the group. He conveys the belief that every member of society has valuable ideas to offer, if they only have the courage to overcome their fears.

Indeed, the magic of the performance comes when those on and off the stage embody this sense of family. The excellently executed music emanating from the orchestra pit wraps around the lines of dialogue that turn spontaneously into duets and multiple part harmonies. Simple scenes erupt into Broadway-style dances involving any number of performers. Pianists Will Bradley and Grace Sprecher fill the auditorium with their clean, rhythmical playing, as do all of the members of the orchestra. Here lies the gems of this production: each member of the production plays a valuable role that builds to this very tangible success. Marla Mendoza’s lighting design creates just the right mood as dawn glows on the newsies, while Audrey Van Brunt’s scenery painting and the fantastic set construction crew add just the right touch to help convey this stark historical period. Tyler Strong and Jake Gifford lead an excellent crew able to balance all the audio feeds of each actor’s mic as well as the magnificence coming from the orchestra. Given the range of audio dynamics, this is no small feat.

On stage, those who are not in a lead role contribute greatly to the success of the performance. Throughout the night, the audience roared with laughter at the one line zingers coming from the newsies, led by Logan Ackerman whose comic lines as Race are like veritable “poils in a bunch of ersters.” The strength of much of the humor is built as one newsie after another adds their wit to the laughter. Then too, scenes of surprise or tension, are heightened by the superb reactions of newsies like Darien Hilmerson’s character “Finch” looking through the bars anticipating the morning’s headline. The singing and dancing is strengthened by the impassioned efforts of Carter Jones, Ellie Lindloff, and a host of other newsies, strong performers playing two or three roles; it is a shame to leave out so many more who put every ounce of effort into the performance. Therefore, everyone reading this should attend one of the three remaining shows.

The strength of this production comes from months of practices, rehearsals, construction, and choreography. There is a polish born of hours and hours of sweat, learning, problem-solving, and real faith. On top of that, this team believes in themselves and each other; they throw themselves at their craft, truly putting their hearts and souls into this play. The bottom line is that Stage Door Productions have a hit on their hands, and it would be terribly unfortunate for you to miss out on this wonderful production and all the surprises it has in store for you.

Tickets are available online for the three remaining performances at www.showtix4u.com  Performances are Friday, November 22nd at 7 pm; Saturday, November 23rd at 7pm; Sunday, November 24th at 1:30 pm. The online ticket sales close an hour before the show, but tickets may be purchased at the door. Popcorn, t-shirts, and drinks are available for sale, so bring a little extra money to support this amazing group of Spartans.