A Quiet Place makes a big noise in theaters 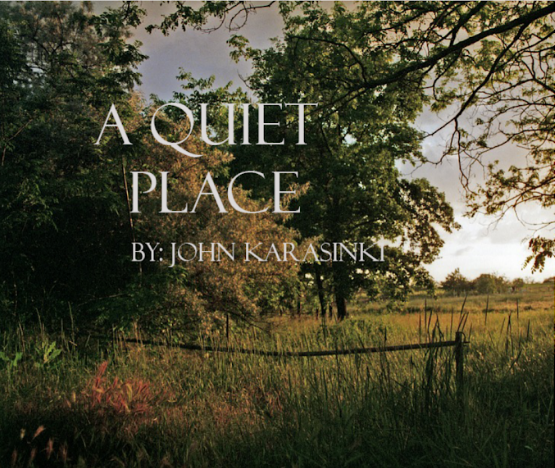 The movie A Quiet Place, written and directed by John Krasinski and with a ninety five percent rating on Rotten Tomatoes, shows how scary things can be in silence. It’s about a family of five who lives in a world, plagued by creatures, who see only through sound. They’re forced to live in silence, using only sign language to communicate. If anyone dares to make a sound, it can plunge them all into a world of danger.

It was produced by Michael Bay, who directed the Transformer movies, Andrew Form, director of both the TMNT movies and The Purge, and Brad Fuller, director of Ouija and the 2009’s version of Friday the 13th. It stars actors John Krasinski , who stars in The Office and 13 Hours: The Secret Soldiers of Benghazi, Emily Blunt, star of Into the Woods and The Huntsman: Winter’s War, Millicent Simmonds, star of Wonderstruck and an ASL advocate who is also a deaf actress, and Noah Jupe, who stars in Wonder.

Krasinski had the right mind to have such a small cast. It really conveyed the feeling of loneliness. They didn’t know whether there were others still alive and it helped fuel their drive to survive. If there would’ve been any bigger of a cast, I don’t think it would’ve made as much of an impact as it did. The small cast also helps you connect with each of the characters and really get attached to each of them.

This movie also had a big impact on the deaf community. With having actress Millicent Simmonds in the cast, it was a breakthrough for deaf actors. Her performance reached out to many aspiring actors and actresses, showing them that you can do anything if you set your mind to it. It also sparked the interest of sign language to many people. Everyone in the cast was very enthusiastic to learn sign language and it really gave them something to bond over. It also shows that you don’t need to make a sound in order to communicate with someone.

In the movie, there is a soundtrack. It is really only a lot of background music to add the needed suspense though. It’s limited to only a few music choices, only because of how the movie is supposed to be. The cinematography in the movie was a key component for the movie. Because of its limited soundtrack, it had to use something else to gather the audience’s attention. The angles they used built up the suspense of what was to come, in place of just using sound to convey it. The angles also portrayed a different version of emotion through where the actors were placed in the shot. The big screen was very effective to show the more creepy and scary shots. It would still be a good movie at your home, but seeing it in theaters had an effect all on its own. It made it so it felt like you were with the family, that you were the one hiding from the creatures.

As much as the plot was kind of predictable, it still hits you like a brick. You’re shown how the population had declined and it gets you right in the feels. You get attached to these different characters and it makes you think about what you would do in their situation. Krasinski had the right mind to have such a small cast, and it really conveyed the feeling of loneliness. They didn’t know whether there were others still alive and fueled their drive to survive. If there would’ve been any bigger of a cast, I don’t think it would’ve made as much of an impact as it did.